Hennepin County has put together foreclosure prevention workshops and now has posted it online… take a look! 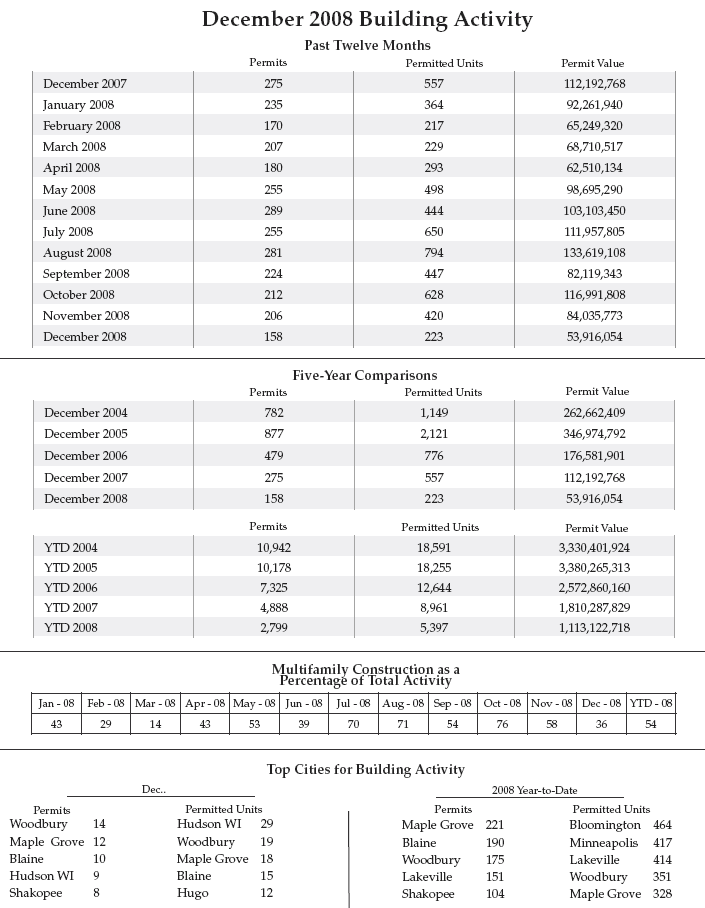 Star Tribune has an article discussing how Sheriff’s Sales in Minneapolis might be peaking. The article gives several possible reasons for the peak in activity and discusses some of the things that are being done to help address the problem.

We’re far from through this crisis, but it seems like every few weeks there is a new data point that shows we’re finding fundamental levels and once we know where are boundaries are, I believe we’ll all feel more comfortable with the future of the housing markt.

The Minnesota Home Ownership Center publishes a regular newsletter on foreclosure prevention and I wanted to share the latest version with you:

The foreclosure process in Minnesota is a long one… often consuming an entire year from when the borrower first misses a payment until the time that the bank assumes control of the home. The Minnesota Home Ownership Center has put together a great flyer on the process and an average timeline.

Right now the Minnesota Legislature is considering a bill to “defer” the foreclosure process for up to an additional year if the borrower of an owner-occupied home makes partial payments (65% of principal and interest amount due). If this bill is signed by Governor Pawlenty, Minnesota could potentially have a 24 month disposition window for some foreclosures.

A lot can happen to a home in the 12 months from the date the borrower stops making payments. In many cases, the homes fall into disrepair as the borrower knows that any investment of time or money on the property will ultimately be lost when the bank assumes possession. Property taxes and municipal bills are also often neglected… I have seen delinquent water & sewer bills for a foreclosed property above $1000 and delinquent property taxes above $5000. These are all bills that will have to be assumed/paid for by the mortgage company. Also, often times there is a significant amount of trash/debris left by the borrower… it is not uncommon to see a large dumpster in front of these properties full to the brim. Add to all of that the year of non-payment of the loan and the legal expenses to the lender to complete the foreclosure process and it is likely that a lender already has a $10,000 – $20,000+ loss at the time they repossess it.

In Minnesota, we have 5 months of average low temperatures below freezing. If a home in foreclosure is vacated during these months, often the utilities are shut off before the bank secures the property and the home’s plumbing ends up freezing and pipes burst. In good circumstances the water was shut off at the meter or the street (sometimes done by the city from non-payment of the water bill) so that only the pipes need to be repaired, which could cost as little as a few hundred dollars or climb to several thousand, depending on the location and extent of pipe damage. In bad circumstances the water can literally fill the house and cause near complete destruction of the interior of the homes, which then become great incubators for mold when they thaw in the spring. In a house profiled by the Star Tribune, one house once worth nearly $700,000 was resold at auction for only $280,000… a loss of over $400,000… about 60% of the value of the home.

While the banks are already overloaded with the huge numbers of foreclosures they have been taking on and are even more buried in their short-sale departments, where responses to offers can take months, the more proactive a bank can be with their defaulted borrowers, the more likely it is that they can recover a larger share of their investment.

Regulatory and industry efforts to create work-out agreements between lenders and borrowers has met limited success and while without these programs foreclosures would be higher, the number of foreclosures today and in the near future are still substantial.

The mortgage lenders are trying to ramp-up staffing for their short sale and foreclosure departments, but these efforts are not proactive, but rather reactive.

While it is in the banks’ best interests to work with their borrowers to modify the loan terms and keep the borrower in the home, there are many circumstances where no reasonable workout can be made. Instead of the banks letting these homes go through the foreclosure process, they should attempt to work with the borrower to get the home sold directly from the borrower to a new buyer, with the bank accepting a sales price that only returns a portion of what they lent back to them, which is called a “short sale.”

The approval of a short sale is a long and difficult process that can take a lender 60-90 days to approve once an offer has been submitted. The largest problem with short sales is that many buyers simply do not have the time nor the patience to wait 2-3 months for a response. Further, the process is not the most appealing for sellers either, since they receive no monetary gain from the sale, many borrowers see little value in the enterprise. These short sales are seller-initiated and more than 1/2 of the listings never close.

A New Way to Handle Foreclosures

Lenders can be more proactive with their defaulted borrowers by initiating a short sale process when the probability of foreclosure is high and the likelihood that a lender-negotiated loan modification that will allow the borrower to become current on their mortgage is low.

Based upon my analysis of sales in Maple Grove and Plymouth in the last 10 months, bank owned properties on average sold for 23.4% less than their previous sale but short sale properties sold for only 16.4% less than their previous sale. Taking into account many of the other costs I mentioned earlier in this article, the savings to lenders could easily be in the 10’s of thousands of dollars vs. letting the home go through the standard foreclosure process.

Here’s the overview of the concept:

To discuss a new way to handle foreclosures is not helpful if it ignores the realities in the market. Here are the biggest hurdles (as I see them) that could make such a plan difficult to implement:

Until these properties cycle through the system and are resold to new buyers they cast a negative effect on neighborhoods, other homes for sale, and other foreclosures too. Waiting for defaulted borrowers to complete the foreclosure cycle when it is all but a sure-thing earlier on in the process is not the best way to protect the investment but rather employing a proactive approach is something can benefit all parties involved and the housing market in general.

A debate recently in my office between another agent and I focused on whether foreclosures and short sale properties really should be used for comparables for “normal” sales.

When it comes down to it, foreclosure and short sale listings most often do sell at a discount to regular listings and should have that taken into consideration, but even in a slow market houses priced appropriately are selling quickly, so those are market prices.

What we do find is a substantial disparity on how much of an impact those foreclosures have on the houses around them.  In areas with low numbers of foreclosure and short sale properties, we find that those properties have little effect on the market as a whole.  Where there are a high number of these properties in a single area, we find the the impact is more like an exponential impact: the higher the number, the more substantial the impact each additional listing has.

A client of mine found information via MNDOT regarding the traffic levels of train tracks throughout Minnesota, including the Twin Cities.  Unfortunately it does not show the train times but it does give an approximate count of the number of trains per day and the speed at which they travel:  http://www.dot.state.mn.us/ofrw/freightData.html